A look from the two shores…

Fernand Braudel is often quoted when the Mediterranean is mentioned. He is not the only author to have dedicated himself to the study of this region, but this French historian and academician is one of the most important figures of the mare nostrum. In the studies that he realized, he underlined that “ la Méditerranée n’a d’unité que par le mouvement des hommes, les liaisons qu’il implique, les routes qui le conduisent [1]“.

The Mediterranean Rim is therefore an obvious center of interest for countries of both shores and this is legitimately one of the reasons that motivated the creation of the Mediterranean strategic studies sessions 5+5 on the occasion of the Summit of both shores organized in Marseille in June 2019.  The first session was organized in January and May 2021 via webinar due to the restrictions imposed by the health context.

Hence, the 2022 session was therefore highly expected because it offered the possibility of bringing together, for the first time, the participants from March 21st to March 25th, 2022 in Toulon. The participants, two from each country with one student from a university or equivalent organization in the field of international relations and one officer from a military academy, have followed a program combining conferences, thematic visits and committee work in order to exchange and build a common vision of what could be the Mediterranean in the future? 13 participants accepted this invitation, but no representatives from Mauritania and Algeria attended the session for administrative reasons, whose attendance is obviously desired for future sessions.

They met on Sunday, March 20th to share a dinner in the presence of the FMES Institute’s training team. The director of the session, General (ret) Patrick Lefebvre and Mrs. Sarah Sriri, head of the “analysis and strategy” project, immediately set the general framework of this first week of the session on the North Shore. Freedom of exchange, friendliness and team spirit should animate the group throughout this unique program. The students will meet again for a second session at the end of May at the Euro-Mediterranean University of Fez in Morocco. The SMHES 5+5 are therefore very ambitious and original in their programs.

This ambition will result in the publication of unofficial recommendations which will be used by the 5+5 partner countries and the Euro-Mediterranean institutions. Food for Thought as we say. It will also result in the creation of a promotion spirit that will be fueled by former and current participants. The objective is to create a community of SMHES 5+5 auditors.

To open this SMHES 5+5 on Monday, March 21st, Mr. Karim Amellal, Ambassador and Interministerial Delegate for the Mediterranean, was keen to address the audience, showing his commitment to this initiative and affirming the fundamental role of cooperation in the Mediterranean. This support from the Ministry of Europe and Foreign Affairs has been shown immediately and confirms the power of this dynamic of exchanges carried by the FMES Institute. He was pleased with the diversity of the themes selected in a very dense program allowing to address many topics of interest whether they are related to security, environment, societal or technological developments or culture. So many subjects that allow for convergence while taking into account differences.

In a globalized world where digital technology occupies a unique position, it was important to share the vision of cyber security, a consequence of digitalization, which effects have undeniable geopolitical implications. Mr. Gilles Ginestet, head of the cyber regional resource center (C2RC), performed this exercise with a real educational talent. In the same way, Mr. Stéphane Claisse from System Factory, accompanied by Mr. Jean-Yves Kbaier, director of Ennovia and Thierry Carlin, CEO of Marinetech, presented the major challenges of innovation within companies and the interactions maintained with the major industrial groups and the competitiveness clusters. This sequence devoted to emerging technologies and companies from startups incubated by competitiveness clusters also allowed to measure the potential cooperation between the two shores. The Institute of Orient of the University of Lisbon presented the Portuguese vision of the Mediterranean at the end of the day. Professor Teresa de Almeida e Silva and Mr. Diogo Cardoso, student and secretary general of the Institute of the Orient, confirmed the Mediterranean identity of Portugal, underlining this geographical paradox and geopolitical reality.

Tuesday, March 22nd was devoted to the environmental approach. The day was punctuated by two events: a visit to the Regional Monitoring and Rescue Operational Centre for the Mediterranean (CrossMed), which enabled the extent of its missions to be measured, and a visit to IFREMER Méditerranée (French Research Institute for the Exploitation of the Sea), where its director, Mr. Vincent Rigaud, personally presented the major challenges of the seabed. In this field, the potential resources are immense and could allow to deal with great challenges for the countries around the Mediterranean.

Wednesday, March 23rd was dedicated to defense and security. In Toulon, the French Navy, with the largest naval base in Europe, offered a wonderful opportunity to appreciate the missions carried out in the Mediterranean Rim, a true globalization laboratory. It was also an opportunity to present the State’s action at sea, thus underlining the singularity of France, which historically entrusts armed forces with this responsibility in coordination with all other institutional actors such as customs, police and civil security. This presentation was a clear demonstration of all the existing forms of cooperation. And they are already very important. The dynamic visit, with the presentation of a Multi-Mission Frigate and the associated simulation tools, raised the interest of the audience.

The next day, Thursday, March 24th, was dedicated to history and culture! Toulon’s history is deeply linked to the way this city views the sea! The naval museum confirmed this, underlining that everything was built around an Arsenal, the primary meaning of which, it should be remembered, is a royal or national military establishment where warships or their equipment are built, maintained, repaired and preserved and where supplies are provided. This sequence was followed by a visit to the Mont Faron Memorial. In this fort built in the 19th century, which became a memorial in 1964, the audience was able to experience the Provence landings of August 1944. This visit also symbolizes the memorial aspect of a cooperation which, during the Second World War, allowed the return of freedom to a nation.

To close this first week of the SMHES 5+5 seminar, the academic dimension should rule the last day, Friday, March 25th, with a conference focusing on geopolitics in the Mediterranean – Middle East region given by Mr. Pierre Razoux, academic and research director of the FMES institute, and a conference focusing on the economic issues of the Mediterranean basin in the aftermath of the COVID 19 health crisis animated by Mrs. Cécile Bastidon, professor at the University of Toulon.

The last word, of course, belonged to our young auditors who precisely outlined the first recommendations resulting from their common reflection. There is no doubt that others will follow during the second week of the seminar organized in Morocco next May. In conclusion, Honoré de Balzac said about the youth that it has astonishing privileges; it does not frighten. These Mediterranean strategic studies sessions 5+5 provide a certain confidence in the future, even if this future will sometimes be difficult. But the main thing is to make it possible together and to discuss about it!

Obviously, this week was a beautiful time of sharing and exchanges! To be continued… 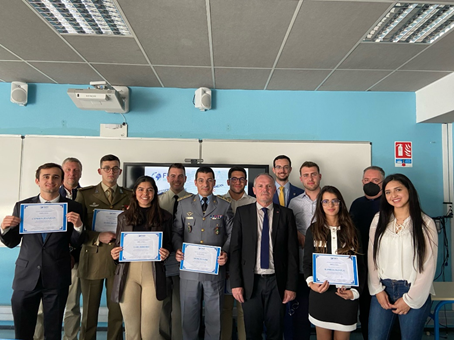