Geopolitical changes and security challenges in North Africa and Sahel

Friday June 4th, 2021, the FMES Institute had the pleasure to co-organize with the Royal United Services Institute (RUSI) and the NATO Defense college a webinar tackling “The geopolitical changes and security challenges in North Africa and Sahel.”

Admiral (Ret) Pascal Ausseur, Director general of the FMES institute and Lt-General Olivier Rittimann, Commandant of the NATO Defense College, welcomed the participants and shared their views on the transitions in North Africa and Sahel, explaining how they perceive the changing geopolitics, threats and opportunities in this wide region.

Dr. Pierre Razoux, Academic director of the FMES institute chaired the panel and stressed the fact that today, all rivalries and frictions in the Middle East have been translated to the Mediterranean area. He underlined that North Africa is firmly divided into vertical strips of influence, limiting the necessary cooperation between North African states.

Dr. Jack Watling, Research fellow for Land Warfare at the Royal United Services Institute, presented his views on “Instability in the Sahel region: the way forward.” According to him, counter-terrorist efforts and development ones are not compatible in this region: we need to choose between the two priorities, the former efforts being a short-term solution and the latter a long-term solution.

Benoit de la Ruelle, officer at CICDE and MENA expert at the OS2MO, briefed on “the impacts of the Libyan crisis on North Africa and Sahel.” He explained that the complex current situation, characterized by foreign interventions, may change in the short term, and still contains a high potential of destabilization. The neighboring countries of North Africa are disunited, provoking external attempts of settlement, while security challenges such as migrations and traffics affect the Sahel, making this  area an open field which enables opportunistic reconfigurations.

Lastly, Dr. Skander Ounaies, Professor of economics at the University of Cartage, addressed “Challenges and instability in Morocco-Algeria-Tunisia.” He dealt with socio-economic problems in each country. He highlighted resources, exports and finance issues in Algeria, as well as political (Hirak) and military ones (regarding Libya). A common challenge for Morocco, Algeria and Tunisia remains the unemployment of young people, leading to poverty and migrations. For Dr. Skander Ounaies, geopolitical changes and security challenges in North Africa are closely linked to development issues.

After their respective presentations, the panelists discussed their views on diverse topics previously addressed with Pierre Razoux and answered the public’s questions. Topics such as the regional ambitions of Turkey, China and Russia, or the concurrence of interests between France and Turkey in the Sahel, were addressed, as well as the instability in the Sahel illustrated by the recent coup in Mali.

The FMES institute was delighted to host this webinar in partnership with the Royal United Services Institute (RUSI) and the NATO Defense College, fueling interesting talks which will contribute to enlight NATO for its future vision towards its southern flank. 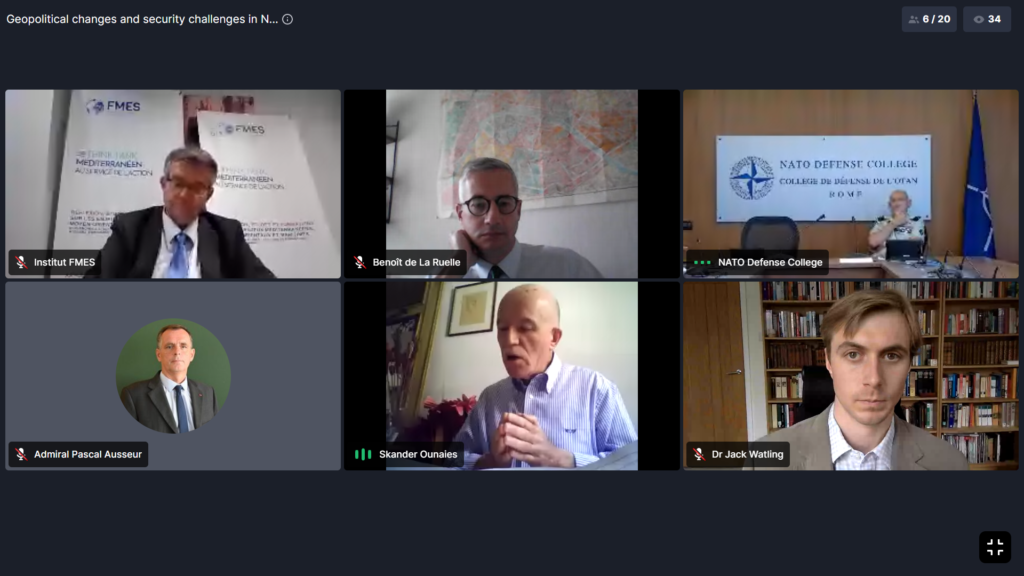